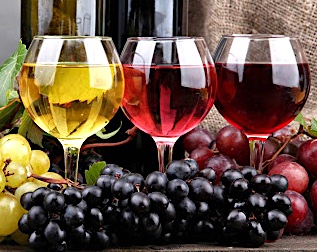 Wines Ranked by How Healthy They Are

Drinking wine in moderation comes with many great health benefits. Having a daily glass of vino has been recommended by the Academy of Nutrition and Dietetics and  Journal of Cardiovascular Medicine. Red wine is especially high in phytochemicals (chemical compounds from plants), including resveratrol and quercetin. These powerful antioxidants have been linked to an array of health benefits including arthritis relief, and heart disease protection. In my best-selling book Food Sanity, I explore cultures from around the world that live the longest and healthiest lives. Many epidemiological studies attribute their commonality of red wine consumption as being the primary reason for their longevity. The same can be said for the “French Paradox,” a term that summarizes the paradoxical observation that French people have a relatively low incidence of heart disease, and live longer in spite of having a diet relatively rich in saturated fats.

While alcoholic drinks, in general, are known to harm the liver, a polyphenol found in red wine called ellagic acid, has actually been shown to improve the health of the liver.   White wine, on the other hand,  isn’t as healthy and has recently been linked to causing skin inflammation issues like rosacea, and a higher incidence of skin cancer compared to people that drink red wine. Red wine also gives us more potassium, manganese, iron, riboflavin, and niacin compared to white wine. As a general rule, the dryer the wine, the healthier it is for you. The sweeter wines have much more sugar and aren’t as healthful.

In this top ten healthy wine ranking, I go from best to worst.

This is by far the healthiest red wine and my top pick. Pinot Noir has a higher resveratrol concentration than any other red wine. Resveratrol is an antioxidant compound that has been shown to improve heart health by lowering bad cholesterol and high blood pressure. Some studies have also suggested it can improve brain health,  insulin sensitivity, and increase our lifespan. Additionally, research also suggests that resveratrol slays cancer cells and bolsters heart health, hence the reason why red wine is commonly recommended by cardiologists.

Research also shows the high resveratrol in Pinot Noir may fight the negative effects of Alzheimer’s, dementia, and other degenerative neurological illnesses.  In addition, the American Journal of Clinical Nutrition published research showing that drinking Pinot Noir can raise levels of omega 3 fatty acids which are believed to promote heart disease and help balance the gut microbiome.

As an added bonus, Pinot Noir has a lower sugar content and fewer calories than other red wines.

Malbec grapes have some of the thickest skins of all wine-grape varieties. That means they’re loaded with resveratrol, quercetin, and other antioxidants that are beneficial to cardiovascular and immune health. Malbec wine contains four times the antioxidant content as Merlot and nearly twice as much as Cabernet Sauvignon.

Malbec wine is also high in polyphenols, which act as powerful antioxidants. They’ve been shown to help prevent cellular damage from free radicals that occur from pollution, smoking, and byproducts of normal metabolism. Polyphenols also have an anti-inflammatory effect on the body, which can help lower the risk of several chronic diseases.

A study published by Science Daily in September 2018 reported that antioxidants found in abundance in Malbec wine, are being incorporated into heart stents developed at REQuisite Biomedical to keep blood vessels from narrowing again after insertion in coronary angioplasty. The new stent releases red wine antioxidants that work by preventing blood clotting and inflammation. The company is also developing a balloon with the two antioxidants in red wine coated on it to treat peripheral artery disease.

This red wine is made from the most planted wine grape in the world! While red wine is known for causing stained teeth, Cabernet Sauvignon actually contains a chemical that kills certain strains of cavity-causing bacteria and protects damage to tooth enamel. This wine choice offers an excellent source of proanthocyanidins, which are potent antioxidants that have been shown to reduce oxidative stress in the body. Furthermore, Cabernet Sauvignon contains catechin and epicatechin, plant compounds that protect against the flu, and other infections (whether that includes the coronavirus remains uncertain).

In moderate, Cabernet Sauvignon reduces the levels of amyloid-beta peptides in the brain, which may improve cognitive brain function. So, for college students wanting to unwind after a long day of classes, this wine is the ‘smartest’ choice for you. In addition, since most college students aren’t known for their healthy eating habits (been there, done that!,)  Cabernet Sauvignon is also an excellent choice for retaining the "good" HDL blood cholesterol and reducing the "bad" LDL cholesterol.

In addition to containing a decent dose of resveratrol, phenolics found in Merlot may prevent the formation of bad cholesterol in the blood, which is a major cause of atherosclerosis, or plaquing of the arteries. Merlot wine also improves the bacterial lining in the large intestine, which enhances healthy gut benefits. A Spanish study suggests that sipping nine ounces of Merlot changes the mix of good and bad bacteria found in the colon in ways that can benefit your health and improve the immune system. In another study published by the Journal of Clinical Nutrition,  merlot is rich in probiotics, which increases the number of beneficial bacteria in the gut.

If you have trouble sleeping, Merlot could help. The grapes used to make Merlot contain melatonin, which can help relax the mind and induce sleep. Keep it to just one glass, though, or else you may end up having even more trouble sleeping.

Petite Sirah wine contains a large number of natural tannins, antioxidants, and resveratrol. This wine choice offers a great source for  polyphenols and other heart-healthy antioxidants which have been linked to the prevention of cancer, cardiovascular disease, diabetes and neurological diseases. Wines high in polyphenols are not smooth and supple tasting; they’re robust and bold and often described as astringent. More bitterness in wine usually directly correlates with the level of procyanidin content. So if you like a dry bitter healthy wine, this one is an excellent choice for you.

Rosé is made from both red and white grapes, and while it still boasts antioxidants and polyphenols, it contains less than red wines. Rosé is better for you than white wine thanks to its heart-healthy polyphenols and resveratrol content, but it doesn’t contain as much as you get from red wine. If you’re watching your waistline, Rosé is the perfect option for you because it’s lower in calories than red wines.  A five-ounce glass of Rosé wine contains only 80 calories, making it one of the lowest-calorie alcoholic drink choices available.

Rosé wine has anti-inflammatory properties and may help combat oxidative stress due to its relatively high antioxidant content. These antioxidants may also help to lower LDL (“bad”)  cholesterol.

This is our first white wine on the list, and it correspondingly has fewer health benefits than red wine. Unlike red wine, which is fermented with the skins, resulting in a high level of antioxidants, Pinot Grigio winemakers strain the skins, which means fewer flavonoids, resveratrol, and other beneficial micronutrients.  However, this white wine does have some health benefits over red wine. Research from the University of Buffalo suggests that drinking Pinot Grigio can help improve lung function better than drinking red wine. Also, Pinot Grigio contains the compounds tyrosol and caffeic acid, which act as anti-inflammatories and antioxidants. Scientists at the University of Milan believe caffeic acid may help prevent rheumatoid arthritis and osteoporosis.

Chardonnay is considered the world’s most popular white wine.

Even though red wine is the healthiest choice, Chardonnay may help to improve cholesterol levels. In one small study involving 146 participants with mild to moderate risk of cardiovascular disease who were followed for a year, those who exercised at least two times per week and drank Chardonnay saw an improvement in their LDL cholesterol levels.  But we have to take into consideration, exercising may have also been a contributing factor to lowering cholesterol levels.

Sauvignon Blanc is the second most popular white wine sold in the U.S and is often referred to as “grassy wine”  because it has a refreshing crispness, thanks to its high levels of acidity and lower amounts of sugar. Some researchers have shown that the unique antioxidants specific to Sauvignon Blanc wine may offer protection against cognitive decline. For instance, in a study published in the Journal of Nutritional Biochemistry, researchers extracted polyphenols from the white wine and fed them to mice for 2 months to determine the impact of a white wine-enriched diet on the brain for Alzheimer disease-like pathology. At the end of the trial, these mice had a lower risk of developing cognitive problems leading to Alzheimer's disease.

Tie for the last place are two sweet white wines, often served with dessert. Neither of these options offers much in antioxidant and nutritional value, but they do pair nicely with sweet dessert-style dishes and fruits, such as chocolate, cheesecake, and strawberries. Riesling and Moscato contain a very high amount of residual sugar, which in turn is broken down into fat and can also lead to a more severe hangover.

While wine has its health benefits, consuming too much has been linked to causing heart disease, liver failure, and even cancer!  The recommended daily serving of red wine is four to five ounces. A full bottle of red wine should last a solo drinker five nights.  Men and women metabolize wine differently which should be taken into consideration. Because men have more metabolic enzymes that break down alcohol, their moderate consumption should range from five to ten ounces accompanying a meal. Women should cut that in half and consume a serving of up to five ounces. Drinking in moderation is the key to reaping the health benefits of wine.

The wine our grandparents drank had far less alcohol content than the wine we have today. Seventy-five years ago, the yeast would not survive in alcohol levels higher than 12%.  Doing so would cause the yeasts to die before all the sugar in the grape juice had been converted into alcohol. Today’s modern-day wine growers have developed resilient yeasts that are able to survive in alcohol levels as high as 16%!

In general, most of the wine sold at the store average between 11% -14% alcohol.  In the red wine category, the winner for most alcohol content goes to Petite Sirah (15%) and the least alcohol content winner goes Moscato, which only has 5% alcohol by volume.  The wines that require a designated driver didn’t make my top ten list and include Sherry, dry wine with a whopping 20% alcohol content, and Port Wine, a sweet, rich dessert wine that also offers 20% alcohol.  The reason these wines can achieve such a high alcohol content is that they are fortified after fermentation with high-proof brandy.