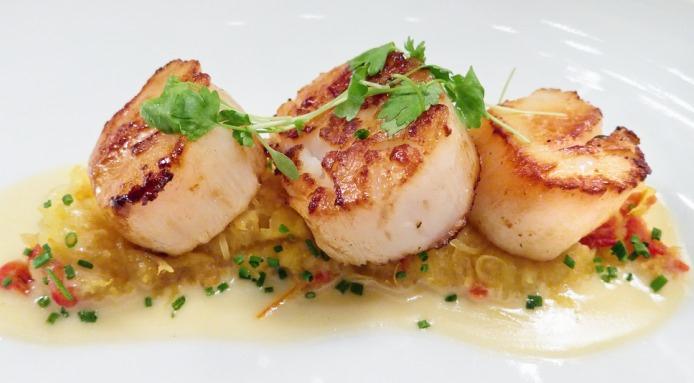 SCALLOPS: THE MOST COUNTERFEIT FOOD!

Scallops are one of the most popular sold seafood in the United States.  Unfortunately, millions of people are being duped!  In my award-winning, #1 bestselling book Food Sanity, I exposed the deceptive fish industry and share tips on how to play detective when shopping for seafood.   Two months ago, the New York Attorney General released a report on seafood fraud and mislabeling. Their investigation revealed over 50% of the fish sold at supermarket chains are mislabeled!

If you paid for a brand new Lexus and discovered the manufacturer put a cheap Chevy engine under the hood, how would you feel?  If that news got out, Lexus would be sued by consumers and go out of business!   Unfortunately, that isn’t the case when it comes to the scallop industry.  Millions of people paying good money for scallops are actually eating cheap stingray, skate, or shark that has been sectioned up by a cookie cutter to look like scallops. Sometimes surimi (fish paste) is used to resemble a scallop.  This fish paste is a compilation of cheap pacific whiting fish and pollock with added starch, sugar, artificial flavors, MSG, and preservatives.

Here's a photo of fake scallops made from surimi (fish paste:) Even if you are buying genuine scallops, you may be paying for excess water.  Scallops are sold by their weight so the more water that's added, the more money the company makes. Scallops are around 70% percent water when they are harvested from the ocean.  According to a Boston Globe investigation of moisture content in scallops collected from 21 Massachusetts supermarkets, many scallops sold contained water levels far exceeding industry standards!   For example, Target’s “wild caught all natural sea scallops’’ tested at 85 percent water, while New England Wild Jumbo Scallops at Trader Joe’s come out to a whopping 86 percent water, according to findings from an independent lab. Consumers are paying $10/lb. for added water weight!

While you can’t always trust labels, you can trust your eyes and nose.  Here are a few tips to help you decipher if scallops are authentic or fake.

*SIZE: Scallops from nature will vary in size and never have a perfect cylinder shape to them.    Fake scallops have an identical circumference because they are made using a cookie cutter device. Also, if you see one edge thicker than the other, it’s either stingray or skate wings that taper greatly from one side to the other.

*TEXTURE: Genuine scallops have distinct grains or fibers running lengthwise, as the edible part of scallop meat serves as a muscle that holds the two scallop shells together. A fake scallop will have fewer fibers and appear more solid and dense.

*THICKNESS: Look at the thickness and see if it’s the same on all sides. If it’s made from a stingray or skate, it will be thicker on one side because their wings taper greatly from one side to the other.

*SMELL: And lastly, do the sniff test.  Scallops should not smell fishy. They normally give off a sweet, seaweed aroma. If it smells fishy, something fishy is going on (literally!)