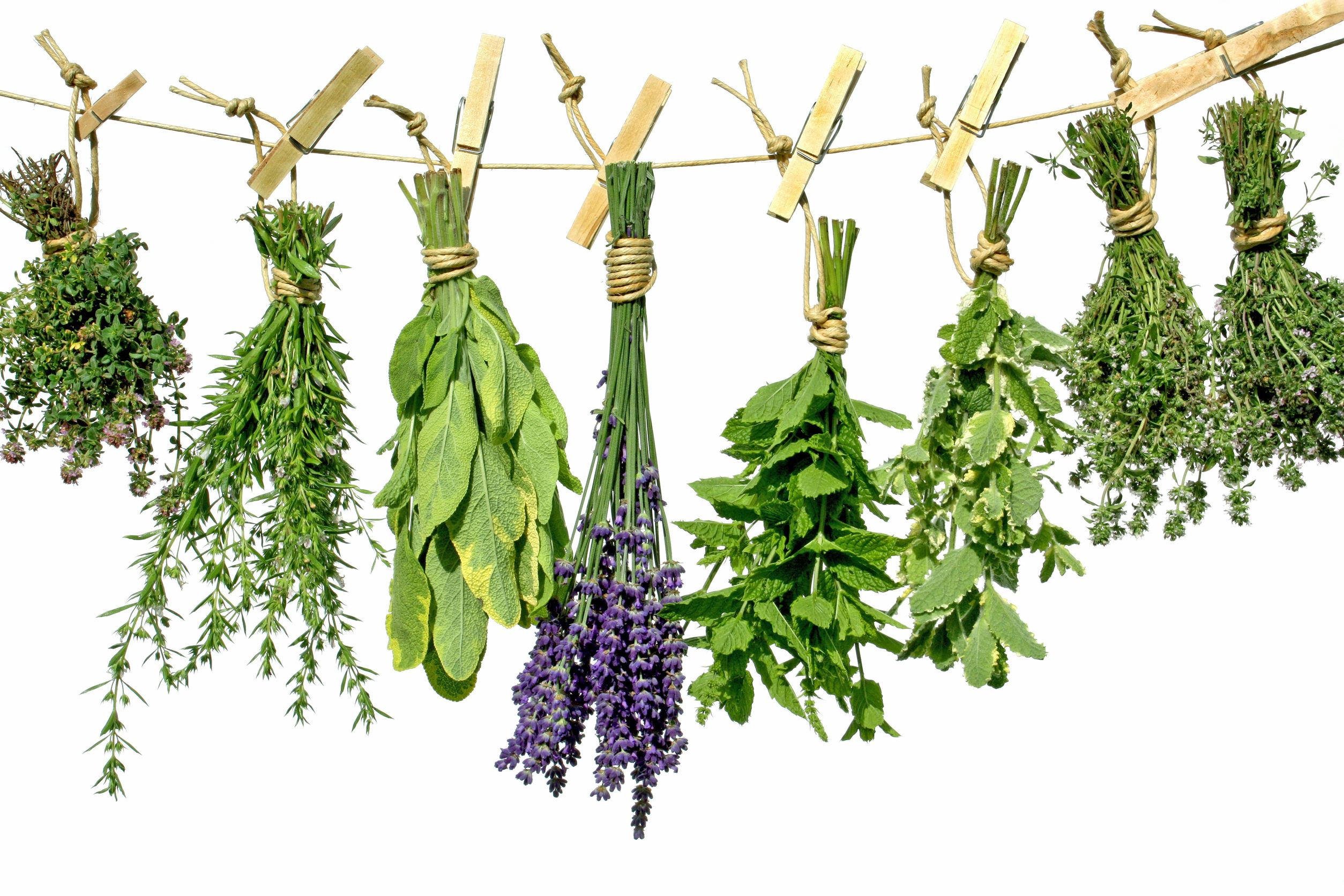 Herbs Ranked By How Healthy They Are

Fresh herbs can add amazing flavor to food but they also have the ability to make food healthier. In my #1 best-selling book  Food Sanity: How to Eat in a World of Fads and Fiction,  I share that herbs have more antioxidants per weight than most fruits and veggies. We’ve all heard the saying, "An apple a day keeps the doctor away." That honor should really go to herbs: Many of them contain at least 50 times more antioxidants than an apple.

Of course, anyone with a spice rack knows that herbs come in endless varieties, but which ones are the healthiest for you?  To answer that question, I've ranked the top 10 healthiest herbs.

This one comes in first place because of the many health benefits of basil, including its immune-enhancing, anti-bacterial and anti-inflammatory properties.  Basil is a great remedy for arthritis: Research shows that concentrated basil extract reduces joint swelling by up to 73 percent within only 24 hours — it’s just as effective as many artificial drugs that have nasty side effects.

As for those immune-enhancing effects, Basil contains powerful phytochemicals, which can help prevent cancer and kill many strains of bacteria, including E. coli.  Basil can protect our organs and tissues against the chemical stressors produced by industrial plants and heavy metals.  Basil is a natural adaptogenic herb, which means it helps protect our bodies against physical, mental and emotional stress by strengthening the immune system. In other words, basil can help the body better handle stress — something we could all use.

There are several different kinds of basil, and while most are fairly similar, I'm particularly fond of holy basil, more commonly known as tulsi.  Holy basil is considered to be a sacred herb in India, and it’s been used in more than 300 different Ayurvedic herbal treatment for thousands of years. Often referred to as the "Elixir of Life," holy basil is believed to increase libido and promote healthy sexual function.

Rosemary is often added to olive oil and fish oil supplements to prevent oxidation.  This oxidative stress  creates free radicals, which have been linked to many chronic diseases including cancer!  Rosemary is rich in carnosol, which inhibits the formation of the carcinogen compound heterocyclic aromatic amines that form when grilling meat.  This herb can also stave off bacterial infections.

Also,  studies show that by simply smelling rosemary, it can improve memory.  Students, keep some rosemary in your pockets during exams so you can sniff your way to better grades.

Similarly, rosemary can help prevent beta-amyloid plaques and suppress acetylcholinesterase, which are some of the primary causes of Alzheimer’s and dementia. This herb can also have a calming effect on those who suffer from chronic anxiety and depression.

In my office, I recommend rosemary to patients who suffer from chronic pain. Research suggests that rosemary may be more effective than acetaminophen. When used in tea or soup, rosmarinic acid, the active ingredient in rosemary, helps to clear out nasal congestion and allergy symptoms as well.

Of all the herbs out there, sage is particularly is helpful at reducing menopause symptoms and lowering cholesterol. Drinking a cup of sage tea twice a day can lower both your total cholesterol and the "bad" LDL cholesterol — it also raises "good" HDL cholesterol.

Similar to rosemary, sage may help people suffering from dementia and Alzheimer’s as well. Sage has shown great promise as a treatment for cognitive decline.  But perhaps the greatest medicinal attribute is that preliminary studies demonstrate that sage may help combat colon cancer, liver cancer, cervix cancer, and breast cancer.

Besides being good on roasted salmon, thyme is a potent germ slayer. The active ingredient in thyme, which is called thymol, is used in Listerine mouthwash, Vicks VapoRub and soaps due to its antibacterial and antifungal properties. Thymol is also used in toothpaste, since it kills germs that cause bad breath, protects the gums from infection and helps prevent tooth decay.

Thyme is good for reducing nasty respiratory ailments as well. It’s a great remedy if you’re suffering from a cold, the flu, bronchitis, asthma or seasonal allergies. It also eliminates phlegm and mucus from the respiratory tract and prevents microbial development that can lead to illness.

Further, much like sage, thyme can reduce “bad” cholesterol and increase “good” cholesterol. “A study published in Anticancer Drugs also found that carvacrol, an ingredient in thyme, has the therapeutic potential for both the prevention and treatment of colon cancer.  Oh, and if you’re feeling down in the dumps, maybe it’s because you don’t have enough thyme on your hands — carvacrol has positive mood-boosting effects and has been shown to increase both dopamine and serotonin (mood-boosting neurotransmitters) levels in the brain. In fact, research shows consuming thyme in low concentrations can improve feelings of well-being and happiness.

Research shows that oregano has powerful antibacterial properties and can help destroy 41 strains of food pathogens,” Friedman says. “Oregano and its components may also protect against some viruses, including herpes.

Similar to several other herbs on this list, oregano has strong anti-cancer properties.  Research published in the journal PLoS ONE shows that oregano exhibits anticancer activity and may help prevent and treat breast cancer by slowing or preventing its progression. Oregano is also rich in vitamin K, which is important for bone growth, maintaining bone density and the production of blood-clotting proteins.

Even better, oregano is another diabetic-friendly herb. It contains compounds that may have the potential to manage type 2 diabetes in a similar way to some prescribed drugs.

The amazing health properties of parsley are often ignored thanks to its popular role as a table garnish. Parsley is a nutritional powerhouse containing vitamin A, vitamin B, vitamin C, and vitamin K, as well as the minerals iron and potassium.  Vitamin A supports vision, vitamin B helps the body in several ways, vitamin C bolsters the immune system, iron improves blood clotting and potassium regulates fluid in the body.

This popular herb is a secret weapon for models who want to quickly drop extra weight before a photo shoot,” Friedman adds. “Parsley helps reduce water retention and bloating due to its natural diuretic properties.

Finally, parsley is particularly good for bone health.  It's rich in calcium, magnesium, vitamin K and potassium, all of which are essential to bone health.

Cilantro is an herb that you either love or loathe: Approximately 10 percent of the population thinks cilantro tastes like soap, and science has shown that this is due to a person’s genetic makeup.  I'm glad to be among the other 90 percent because I love cilantrol

Cilantro contains a hefty amount of vitamins and minerals that compares to those in parsley. Cilantro has antiseptic, antifungal, antioxidant and antibacterial properties, too.  A compound found in the leaves and seeds of cilantro, dodecanal, has been found to have an antibacterial effect against salmonella: In laboratory tests, dodecanal was twice as efficient at killing salmonella than the commonly used medicinal antibiotic gentamicin.

Cilantro also has the capacity to remove toxic heavy metals from the body. Heavy metals in the body can lead to heart disease, hormonal imbalances, neurological conditions and infertility.  A study published in the International Journal of Food Microbiology found that cilantro is protective against food poisoning. They found listeria, a bacterium that causes food poisoning, is completely neutralized after ingesting cilantro.

Having a hard time sleeping at night?  Cilantro to the rescue!  Research shows that consuming high levels of cilantro extract produces the same levels of anti-anxiety effects as Valium, which helps you to relax and sleep better.   Plus, with summer coming closer, cilantro may help prevent sun damage to the skin, according to one study

One of the most important organic compounds found in chives is allicin, which has been shown to reduce ‘bad’ LDL cholesterol levels and improve cardiovascular health. Allicin has also been shown to help lower blood pressure.

Chives have anti-cancer properties, too. In a study published by the Journal of the National Cancer Institute, researchers investigated the relationship between allium vegetable intake and prostate cancer, and they found that men with the highest intake of allium vegetables [like chives] had the lowest risk for prostate cancer. Frequent consumption of chives may also lower the risk of esophageal and stomach cancer.

If you’re pregnant, make sure and add chives to your diet.  They’re a rich source of folate, which helps in the brain development of the fetus. Plus, folic acid can specifically help prevent birth defects, especially in the baby’s brain and spinal cord.


People suffering from Irritable Bowel Syndrome may benefit from ingesting mint since it contains a compound called menthol, which has a relaxing effect on the digestive tract. The Journal of Clinical Gastroenterology published research on over 700 patients with IBS and found that those who ingested oil from the mint leaf showed significant improvement.

In fact, mint can help any kind of stomach ailment, including an upset stomach or indigestion. Research shows that mint helps food pass through the intestines quicker, which may also have a positive effect if you suffer from constipation.

In addition to ingesting mint, smelling it can have positive effects on brain function. Students that smell the aroma of peppermint prior to a test have shown marked improvements in memory.

Finally, as you probably already know, mint can reduce bad breath, which you’ll need after eating all those chives.

Cannabis has been used to treat ailments for over 3,000 years. If you live in a state where medical or recreational marijuana is legal, this herb has many health benefits.

Surprisingly, cannabis may help you lose weight, too, despite the incessant munchies.  It  has been shown to promote a healthy gut microbiome, which may help you lose weight.  An American Journal of Medicine study found that cannabis consumers have smaller waist circumferences than non-consumers. This is important since overall waist circumference can raise your risk of heart disease, type 2 diabetes, and stroke.

Cannabis can be used to treat an assortment of ailments as well. Research shows that cannabis may help those suffering from glaucoma, epilepsy, Alzheimer’s, Parkinson’s, arthritis, PTSD and cancer.

Not to mention, unlike smoking tobacco products, which have been proven to cause lung cancer, smoking marijuana may actually improve the health of the lungs. A study published in the Journal of the American Medical Association found that not only does marijuana not impair lung function, but it may also even increase lung capacity. In this study, researchers tested the lung function of 5,115 young adults over the course of 20 years. Tobacco smokers lost lung function over time, but pot users actually showed an increase in lung capacity.

As for the downsides that come with cannabis, During the Proceedings of the National Academy of Sciences, researchers showed abnormalities in brain function and structure of long-term marijuana users with MRI techniques. Their findings showed chronic marijuana users have smaller brain volume than those who don’t use the substance. That means long-term use of cannabis may shrink the brain. Maybe sniffing memory-boosting peppermint leaves while toking a joint could help counteract this?  LOL