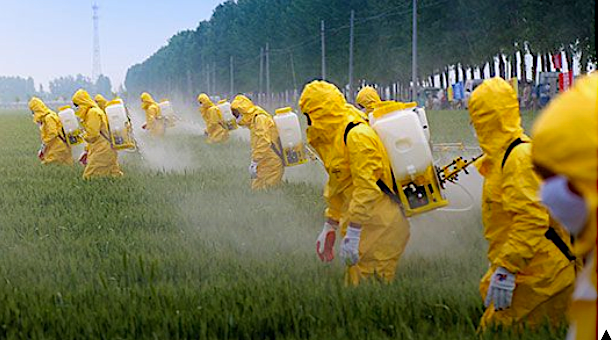 Glyphosate: The CAUSE of Gluten Intolerance

Many people are having trouble digesting gluten and some get severely sick after eating it! Why all the sudden in the last two decades has gluten become so hard for humans to digest? People had no problem eating pizza in the 1990s. Today, just one bite can cause severe digestive distress for many. Our grandparents didn’t have issues with gluten, why do we? Blaming gluten is like focusing on the smoke instead of the fire! As I share in my #1 best-selling book Food Sanity, forensic fossil evidence of our caveman ancestors proves we’ve been eating gluten for 3 1/2 million years. According to research conducted by the University of Utah, 40% of our ancestors' diet was gluten.

A major reason so many have developed gluten intolerant is because they are consuming a chemical called glyphosate, the active ingredient in Monsanto’s herbicide Roundup. This toxic chemical kills weeds but it also destroys the lining of our colon, creating a "leaky gut." This allows toxins, microbes, undigested food particles, and antibodies to escape from our intestines and travel throughout the body via the bloodstream. We can't put the blame on gluten!

In a study published in the journal Interdisciplinary Toxicology, researchers found a profound link to people ingesting glyphosate and developing celiac disease and gluten intolerance. This herbicide also destroys the intestinal walls of fish.

Now that glyphosate is getting the attention it deserves, losing a $2 Billion verdict and being labeled as a carcinogen by the World Health Organization and the state of California, hopefully, there will be more focus on its causative relationship to the escalating epidemic of gut dis-ease.

HOW YOU CAN AVOID CONSUMING GLYPHOSATE:


Unfortunately, glyphosate is showing up in everything from fruits, veggies, wine, beer, drinking water, chips, honey, to infant formula! In Food Sanity, I share several tips on how to avoid consuming this toxic chemical. Here are a few:

2. Eat locally grown produce, like at a local co-op or Farmer’s Market. The farther your food travels, the more processing it endures and the greater the risk of contamination.

3. Grow your own produce. It doesn’t have to be an elaborate garden. I have a tiny garden that is only 10 x 3 feet. I grow my own herbs, organic tomatoes, cucumbers, peppers, lettuce, blueberries, squash, and strawberries. You can see pictures of my garden with other healthful tidbits by following me Instagram: DrDFriedman.

4. Don’t use Roundup! You can make your own weed killer using vinegar and Epsom salts. This will kill the weeds while being environment and pet-friendly. If you want to get a non-toxic pre-made product, one that I recommend is called Doctor Kirchner’s Natural Weed Killer. It’s made with ocean water and food-grade vinegar. The ocean water is collected at high tide and contains 70 minerals and trace elements including magnesium, calcium, and potassium. This enriches the ground, making it more suitable for future plant growth.

Just say no to Roundup!