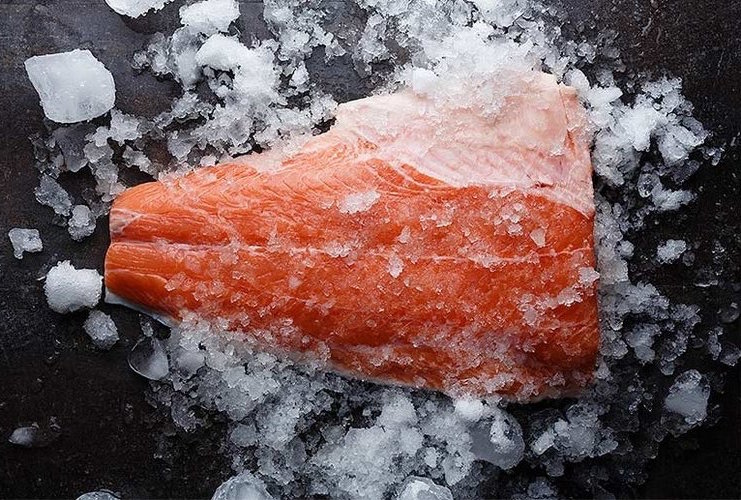 The picket fence, the silo, the green grass; nothing says wholesome like “farm fresh.” This image is splashed on labels at the grocery store as the symbol of wholesomeness. From veggies to fruits to the grain we eat, food is perceived as healthy as long as it is fresh off the farm. Not so when it comes to fish. Farmed fish are commercially raised in cages or tanks. The most common farm-raised fish are salmon, carp, tilapia, European sea bass, catfish, and cod. Because these farmed fish live in confinement, they get no exercise, nor do they ever see the wild. They are packed so tightly; they rub against the sides of their cages as well as one another, causing damage to their fins and tails, which leads to infection. This creates the need for antibiotics. The most commonly farmed fish is the Atlantic salmon. This is also the second-most-popularly eaten fish in America, behind tuna. Ninety percent of the salmon sold in the United States is farm raised.

Farmed-raised fish have two to three times fewer omega-3s than their wild counterparts. Meanwhile, the fat content of farmed fish ranges is 20 percent versus 7 percent for wild. Farmed salmon contains polychlorinated biphenyls (PCBs). PCBs used to be widely used as electric and cooling fluid. Because of its carcinogenic effects and classification as an organic pollutant, PCB production was banned by the United States Congress in 1979 and by the Stockholm Convention on Persistent Organic Pollutants in 2001. How do PCBs still show up in farm-raised salmon today? In order to feed farmed salmon, which are carnivores, producers have to harvest other wild fish, and quite often, these fish come from areas high in PCBs, like the North Sea, in which they feed off of smaller organisms that have been PCB contaminated. Consumption of salmon that have eaten PCB has been linked to increased risk of cancer. Cornell University showed concentrations of PCBs are significantly higher in farmed than wild-caught salmon. The reason for this is because farmed salmon contains more fat than wild salmon, and PCB accumulation settles in the fat. If you weren’t allowed to exercise and confined to a tiny cage your entire life, wouldn’t you gain more fat than someone who was able to run around the block all day?

Farm-raised salmon are also fed corn to fatten them up even more. Salmon don’t eat corn; it’s not part of their natural food chain. Salmon from the wild have less fat than those that are farmed raised. Salmon are very strong fish and are able to swim upstream against rugged waters. Just like a professional marathon swimmer would have less fat on his body, so do wild-caught salmon. Professional swimmers generally have the lowest percentage of body fat compared to any other type of athlete. Because PCBs grow in fat tissue, stoic, obese farm-raised salmon are a haven for these toxic chemicals. The Environmental Working Group (EWG) in 2003 released results of the most extensive tests to date of cancer-causing PCB levels in farmed salmon consumed in the United States. EWG bought the salmon from local grocery stores and found 70 percent were contaminated with so much PCB that they seriously raise cancer-risk concerns, in accordance with standards set by U.S. health agencies. Farm-raised salmon has forty times more PCBs than any other food on the market. There are also other toxins found in farm-raised salmon, including toxaphene and dieldrin (linked to Parkinson’s disease, breast cancer, and reproductive- and nervous-system damage), both of which were abundant in farm-raised salmon. Consumption of farmed salmon at relatively low frequencies results in elevated exposure to highly toxic compounds with commensurate elevation in estimates of health risk.

Wild salmon are deep reddish orange on the inside. What most people don’t realize is that salmon get their color from what they eat. Wild salmon eat krill, tiny shrimplike crustaceans that contain carotenoids, which are naturally occurring orange pigments. Farm-raised salmon eat feed that is made of corn, soy, other fish, poultry litter, and hydrolyzed chicken feathers. Because of this unnatural diet, farmed salmon meat doesn’t turn its natural orange-to-red color but, rather, a less-appetizing light gray. Studies have shown that consumers won’t buy gray-colored salmon, so in order to make these artificially grown fish look natural, farmers use chemicals called canthaxanthin and astaxanthin to dye their insides to make for a more pleasing aesthetic.

Several major chemical companies produce these “internal paints,” the largest being Swiss chemical giant, Hoffmann La Roche. This is the same pharmaceutical giant that produces tranquilizers like Valium and Rohypnol (aka the “date rape” drug). To help the farmer decide exactly what tint of pink they want to paint the fish’s insides, the salesman will bring a SalmoFan. This is a color selection fan similar to the one you would find at a paint store when deciding what color you want to paint your bathroom walls. Scientists have found a link between a high canthaxanthin intake and damage to the human retina, prompting the European Union to ban canthaxanthin for direct human consumption, due to its potential for vision damage.

Farm-raised fish are fed land ingredients like soy and corn, and that means they are also eating the pesticides used in the process of harvesting them. When these chemicals are ingested by fish, they end up in their meat, which is then consumed by humans. Scientists have tested the flesh of farm-raised fish using a highly analytical system that detects the accumulation of pesticide residue. The more fat-soluble a substance is, the higher the probability of the pesticide accumulating in fish.” Farm-raised fish are FAT-raised fish! Pesticides are among many toxins found to be up to ten times greater in farmed salmon than in wild Pacific salmon. An international survey revealed that eleven compounds representing five pesticide types are currently being used on commercial salmon farms for sea lice control.

The most widely used compounds are called dichlorvos, azamethiphos, and cypermethrin. Sadly all of these compounds have been associated with health risks in humans. Dichlorvos shows up in fish meat and is considered toxic. A study by the National Toxicology Program reported that dichlorvos increases the incidence of tumors of the pancreas, mammary glands, and stomach in animals. We’ve discussed antibiotic use in cattle and poultry, and these same issues apply within the farm-raised fish industry. With the combination of exposure to disease and the ability of disease pathogens to multiply quickly in the high-density conditions common to confined cages, antibiotic use is a common practice in the salmon-farming industry. Farmed salmon get antibiotics into their system through medicated food. And in this industry, too, the drugs used for farm-raised fish are also used to treat human diseases. The frequent use of antibiotics in aquaculture and other industries poses a risk to human health by allowing disease microbes to become resistant to antibiotic treatments, making it more difficult to treat human disease.

From Label to Liable

I love the famous line used by Tom Hanks in the movie Forrest Gump when Forrest says, “Life is like a box of chocolates; you never know what you’re going to get.” Unfortunately, this holds true when relying on fish labels. Sometimes you have to play detective instead of relying on what you read. In 2005, Alaska passed legislation requiring that any farm-raised fish sold in the state be labeled as such. In 2006, a Consumer Reports investigation revealed that a considerable amount of salmon sold on the market labeled as “wild-caught” is actually farm raised. They bought twenty-three supposedly “wild” salmon fillets, and lab tests revealed that only ten of the twenty-three fillets were from wild-caught salmon. If a label on salmon states, “Fresh Atlantic Salmon,” the manufacturer is trying to deceive you. That means it’s farm-raised salmon. There are no commercial fisheries left for Wild Atlantic Salmon. If the term “wild-caught” is used correctly, it means the salmon is Alaskan, Norwegian, or Tasmanian. In 2005, the New York Times published another investigative report on consumers being conned into believing they were buying wild-caught salmon. Their tests revealed that six of the eight “wild-caught” fish were really farmed raised. They also concluded that salmon label deception is more frequent when wild fish go out of season. Fast forward six years to December 2011, when Consumer Reports published findings on fish label accuracy, and discovered something very fishy was still going on! They analyzed 190 fish purchased at retail stores and restaurants in New York, New Jersey, and Connecticut. DNA testing was used for genetic sampling and researchers compared the genetic sequences against standardized gene fragments that identify its species, similar to what criminal investigators use. They concluded that “king salmon” and “sockeye salmon” fillets were actually coho, generally the least expensive of the three salmon species. Below are some of their additional findings:

The FDA has spent very little time looking for seafood fraud in recent years. Eighty-six percent of the seafood that Americans consumed in 2011 was imported, mainly from China, Canada, Indonesia, Ecuador, Thailand, and Vietnam. FDA officials physically examined only about 2 percent of imported seafood from 2003 to 2008. Only 0.05 percent was checked for seafood fraud (mislabeled, substituted, or short-weighted items). In 2015, the conservation group Oceana had researchers collect 82 samples of salmon labeled “wild” from restaurants and grocery stores in Chicago, New York, Washington, D.C., and Virginia. Using DNA analysis, they found almost half the salmon, 43 percent, was mislabeled—and 69 percent of that mislabeling was farmed Atlantic salmon being sold as wild. Sadly, label laws have not changed. It’s important for you to look at labels as a preliminary gauge point but not to rely on them for total accuracy. Most restaurants and grocery stores don’t try to hide the fact that their fish are farm-raised. Many proudly boast this fact. Remember, the word farm on anything sells more product, and most people don’t associate this four-letter word as being a negative. 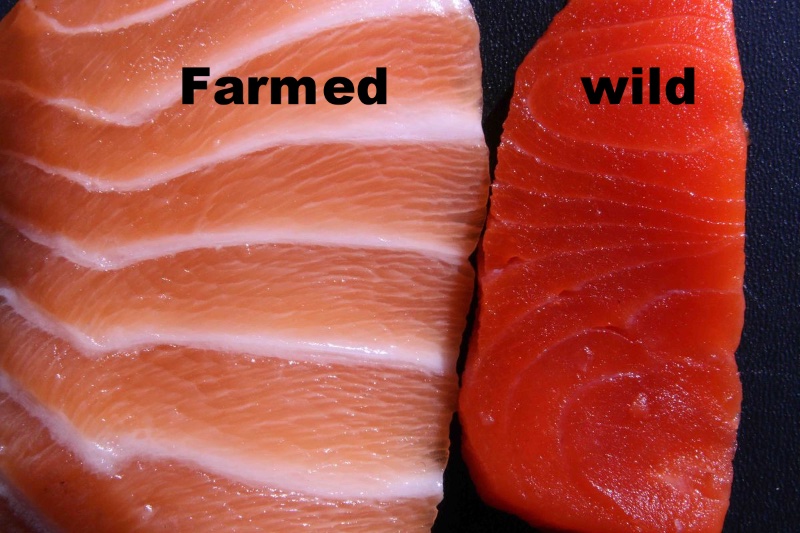 Be wary of color. Farm-raised salmon has been fed artificial coloring to fool you. Avoid light orange- or pink-colored salmon, especially when you see white stripes (fat) between the meat layers. Wild salmon contains very minimal fat, and the color is a deeper, darker shade of red that is more consistent throughout.

The reason farm-raised fish have more fat because they don’t get any exercise. Salmon in the wild are very lean because they swim against the current. Have you ever seen a marathon swimmer that was fat? If you don’t trust your eyes, take the taste test: wild salmon tastes tangier without a metallic taste, and the meat has a firmer consistency. For more information on Fish and all the other food groups, get a copy of my award-winning, #1 National Bestselling book Food Sanity, How to Eat in World of Fads and Fiction.