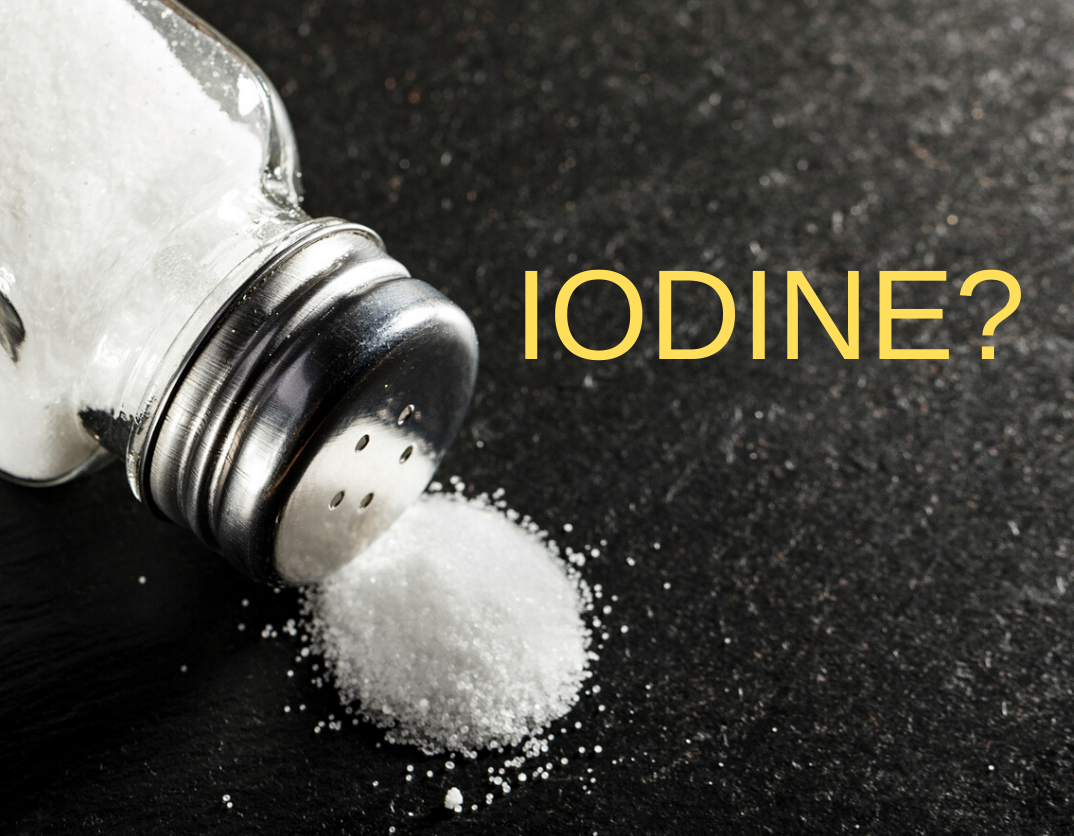 Do We Need Salt For Iodine?

Iodine is a trace mineral that the thyroid gland uses to produce thyroid hormones, which aid in tissue repair, regulate our metabolism and promote proper growth and development.  Iodine deficiency is extremely rare in the U.S but a severe iodine deficiency can lead to hypothyroidism, a condition that occurs when the thyroid gland is not producing enough thyroid hormones. Symptoms include fatigue, weight gain, constipation, dry skin, and hair loss.  In the 1920s, health authorities began adding iodine to table salt in an effort to prevent iodine deficiency.   While this did help remedy an iodine deficiency, consumption of processed salt has caused several life-threatening health conditions including obesity, diabetes, heart failure, and cancer!

Table salt is created by superheating natural salt to 1,200 degrees, which destroys all of its beneficial compounds. After the salt is stripped of 80+ minerals, it's bleached and then anti-caking agents are added. The most commonly used anti-caking agent is sodium aluminosilicate (E554,)  which comes with several possible side effects including Alzheimer’s disease, liver, and kidney disease. Calcium Silicate (E552) is another ingredient added to salt.  On June 27, 2018,  The European Food Safety Authority published a paper stating, "The safety of E552 cannot be assessed as a food additive due to the lack of reliable data on subchronic and chronic toxicity, carcinogenicity, and reproductive toxicity."  Some studies suggest that these anti-caking agents  may have a negative effect on the nutritional content of food and cause a degradation of vitamins we consume in our diet.

The average American consumes upwards of 4,300 mg (10 grams) of sodium per day! The American Heart Association recommends no more than 1,500 mg per day for most adults.  In addition, too much processed salt in the diet can lead to mineral imbalances, causing people to crave more carbs and sugar.  Movie theatres use this to their advantage by over salting popcorn so consumers come back to the concession stand for another sweet sugary soda or candy.  The same with fast-food restaurants. Adding salt to burgers and fries increases the odds of consumers coming back for another soda.  Also, consuming processed salt causes water retention and the formation of cellulite.   Cellulite is what causes those orange-peel dimples on the thighs, hips, butt, and belly.  The reason this happens is because the kidneys, which filter out waste from the blood, maintain a specific ratio of electrolytes, such as sodium to potassium, to water. Processed salt can restrict this normal process

Okay, so white table salt is bad for us, but don’t we need it to keep from getting an iodine deficiency?

According to researchers at Harvard Medical School, "Cutting out salt won't affect your iodine levels."  They recommend getting our iodine requirements from food, not salt.   Research  suggests that people absorb as little as 10% iodine from table salt so scientists aren’t exactly sure how much iodized salt truly contributes to an individual's iodine levels. However,  the iodine we get from food is fully bio-available.  The recommended daily intake (RDI) of iodine is 150 mcg per day for adults which can easily be achieved through the diet.

Here are some great food sources of iodine:

*1 gram of seaweed supplies up to 2,500 micrograms of iodine.

*6 ounce of cod gives you 200 micrograms of iodine.

*2 eggs give you 48 micrograms of iodine.

*1 cup of boiled lima beans has 16 micrograms of iodine.

As you can see, getting enough iodine in the diet is not difficult.  Several varieties of fruits and vegetables contain iodine, but the amount varies depending on the iodine content of the soil, fertilizer use and irrigation practices.  Drinking a large glass of organic cranberry juice supplies enough iodine for the body for an entire week!  If you have an iodine deficiency and happen to hate all the iodine-rich foods listed above, instead of reaching for that salt shaker, take an iodine supplement.  Iodine supplements are  96.4% absorbed in humans.  However, before everyone goes out and buys an iodine supplement, it’s important to note, too much iodine can cause some of the same symptoms as iodine deficiency—including goiter, and hypothyroidism. Iodine-induced hyperthyroidism can also result from high iodine intakes, usually when iodine is administered to treat iodine deficiency. Studies have also shown that excessive iodine intakes cause thyroiditis and thyroid papillary cancer.  In addition, people with autoimmune thyroid disease and iodine deficiency may experience adverse effects with iodine intakes that are considered safe for the general population.  The iodine naturally found in food will not create a cellular overload; however, overdoing it on table salt can.

While white processed table salt isn’t good for our health, in my #1 best-selling book Food Sanity, How to Eat in a World of Fads and Fiction,  I cover why consuming the right kind of salt is healthy.  Naturally devived salt nourishes the body at a cellular level and enhances the body's health and well-being.  We need salt to survive! our body is made up of  70% saltwater. Without salt, our heart, muscles, organs, and brain would cease to function.  You don’t have to avoid adding salt to your favorite foods, just use naturally derived salt that is not stripped of its nutrients, bleached and mixed with unhealthy anti-caking agents.

Reach for naturally derived unprocessed salt like Pink Himalayan Salt,  Black Hawaiian Lava Salt or Redmond Ancient Sea Salt. These options don't have added iodine but they are chock-full of  80+ healthful minerals needed by the body including calcium, magnesium, potassium, copper, and iron. Unlike white processed salt that makes you hungry when you consume it,  unprocessed, naturally derived salt satisfies the cells and can help you curb your appetite and lose weight.