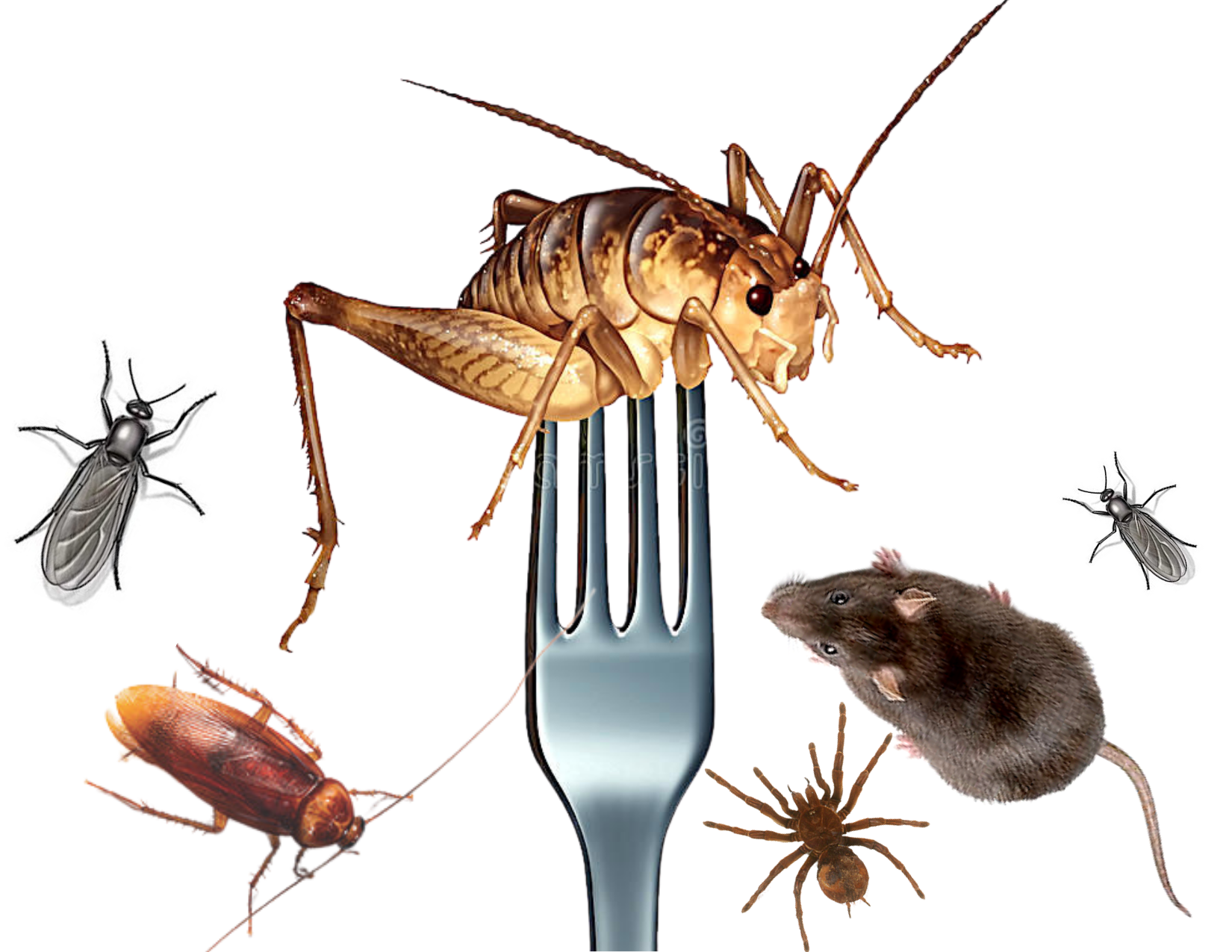 BUGS, RAT HAIRS AND RODENT POOP IS IN YOUR FOOD!

If the thought of eating bugs grosses you out, you probably shouldn’t read the Food and Drug Administration's "Defect Levels Handbook" before a meal. This document lists the allowable limits on food “defects” which includes how many maggots, roaches, spiders, rodent excrement (poop,) and rat hairs are allowed in everyday foods.  On average, people eat 140,000 bug pieces every year!

The FDA considers such things to be "natural or unavoidable defects.”  While most Americans may be disgusted at the thought of eating bugs, it’s actually a common part of a traditional diet in many areas of the world including China, Africa, Asia, Australia, New Zealand, and some developing regions of Central and South America.  In fact, two billion people worldwide purposely eat insects – a practice known as entomophagy.

The FDA claims eating insects, rat poop and rodent hairs present no health hazards for humans. If it helps make you feel better, insects are rich in protein, healthy fats, iron,  calcium, and low in carbohydrates.

That said, here’s a list of some of the allowable  “other ingredients” found in many popular food items:

The FDA allows up to 450 insect parts and nine rodent hairs in every 16 oz. box of spaghetti.  If you add 7 oz of tomato sauce to your pasta that’s an additional 20 fly eggs, and 74 allowable mites. Do you like mushrooms in your spaghetti sauce? For every 4 oz. can of mushrooms, add to the mix another 20 maggots! (Hey, at least they’re the same color as the mushrooms.)

Hidden beneath their sweet fruity flavor is an average of four or more rodent hairs for every 3.5 ounces (100 grams) and five whole insects.  That’s not even including the teensy mites, aphids, and thrips allowed in the mix.

Ever have a crappy cup of coffee? It could be because coffee beans are allowed to have 10 milligrams of animal poop per pound!  That’s what I call the ultimate crapuccino!  The FDA allows 10% of coffee beans to be infested with insects.  To put that into perspective, if you drank one cup of coffee every day, in one year you’ve unknowingly consumed up to 140,000 insect fragments!

A 4.4-ounce chocolate bar may have up to 74 insect parts. That means chocolate lovers could be adding nearly 6,000 pieces of bugs to their diets annually.  But wait, there’s more!  Cockroach parts are among the most common contaminants found in chocolate. Maybe you should always choose chocolate bars with peanuts so that unexpected crunch doesn’t leave you wondering.

Do you need some motivation to help you stay away from all those tempting cookies, cakes, and fattening donuts?  Seventy-five insect fragments and one rodent hair are allowed per 1 cup of flour.  The average person consumes up to 91,650 bugs every year from consuming food made from flour.

While it contains healthful vitamin C, you may also be getting a nice dose of vitamin BEE!  This citrus juice is allowed to contain one crushed bee, five fruit flies,  two maggots, and a partridge in a pear tree (per cup).

If you enjoy downing a few brewskies,  the hops used to make that beer contains creepy crawlers! Beer can have up to 25,000 bug bits per 100 grams (about two and a half cups). Maybe they should change the name to Bugweiser?

If you enjoy a glass of vino, bugs happen!  These critters hitchhike on the grapes, hang out during fermentation, and crawl around the winery. You could be consuming up to 40,000 bug bits per 8 oz glass of wine.  Cheers!

If you’re like me, you are among an elite group of people that enjoy the taste of these smelly cruciferous veggies. But my love for them has diminished a bit after learning that FDA allows  an average of up to 30 aphids and or thrips per 100 grams.

Considered one of the healthiest vegetables to have on your plate, you may be also getting a mouthful of insects with every bit!  The FDA allows up to 60 aphid bugs per 100 grams of frozen broccoli. If you eat it regularly, you could be unintentionally consuming over 1,600 aphids every year.

This healthy veggie can contain 40 or more insects, beetle eggs, heads, or body parts for every ¼ pound.

BERRIES
Raspberries and blueberries make sweet treats for insects like worms and beetles. The FDA allows up to four larvae or ten whole insects per 500 grams of berries, or about 2.5 cups.

Canned corn is allowed to have two earworm larvae, along with larvae fragments and the skins of the worms discarded as they grow.

THE SPICE OF LIFE

Insects can also be found in many of your favorite spices.

Cinnamon is allowed to have up to 10 rodent hairs and 400 insect fragments per 50 grams (or ¼ cup) of cinnamon.  If you’re a vegan, better skip the snickerdoodle cookies.

Oregano can contain 300 or more insect pieces and  two rodent hairs for every 10 grams. A bottle of oregano is about 18 oz. or 510 grams.

Black Pepper  may contain 475 bug parts per 50 grams (or ¼ cup) and still be considered safe to eat. That’s quite a bit of insect parts spicing up your meal. And that’s not even including the  2 allowable rodent hairs.

Paprika can have 75 insect parts and 11 rodent hairs for every 25 grams (just under an ounce). A typical spice jar holds about 2 to 3 oz.

Curry (powder) can have 2 insect fragments per 25 grams and  4 rodent hairs.

Ginger is allowed to have three milligrams or more of mammalian excreta (i.e. mouse poop) per pound.

Nutmeg can have a whopping 100 insect fragments per 10 grams and 2 rodent hairs.  Now we know what makes eggnog so delicious!

Thyme can have 925 insect fragments per 10 grams, 3 rodent hairs. I think it may be thyme to reconsider adding this spice to our food!

I told you this article was going to bug you!  However, unless you want to give up eating altogether, you might as well come to grips with the fact that you have been eating worms, maggots, insects, roaches, rodent hairs, and rat poop your entire life!  They are all present during the food manufacturing process, from the field where the food is grown to the storage and transit of the food to your grocery store.  But you’ll be happy to know when it comes to eating bugs, they are actually healthy, sustainable and some experts believe eating them could save the planet.  Don’t you feel better now?