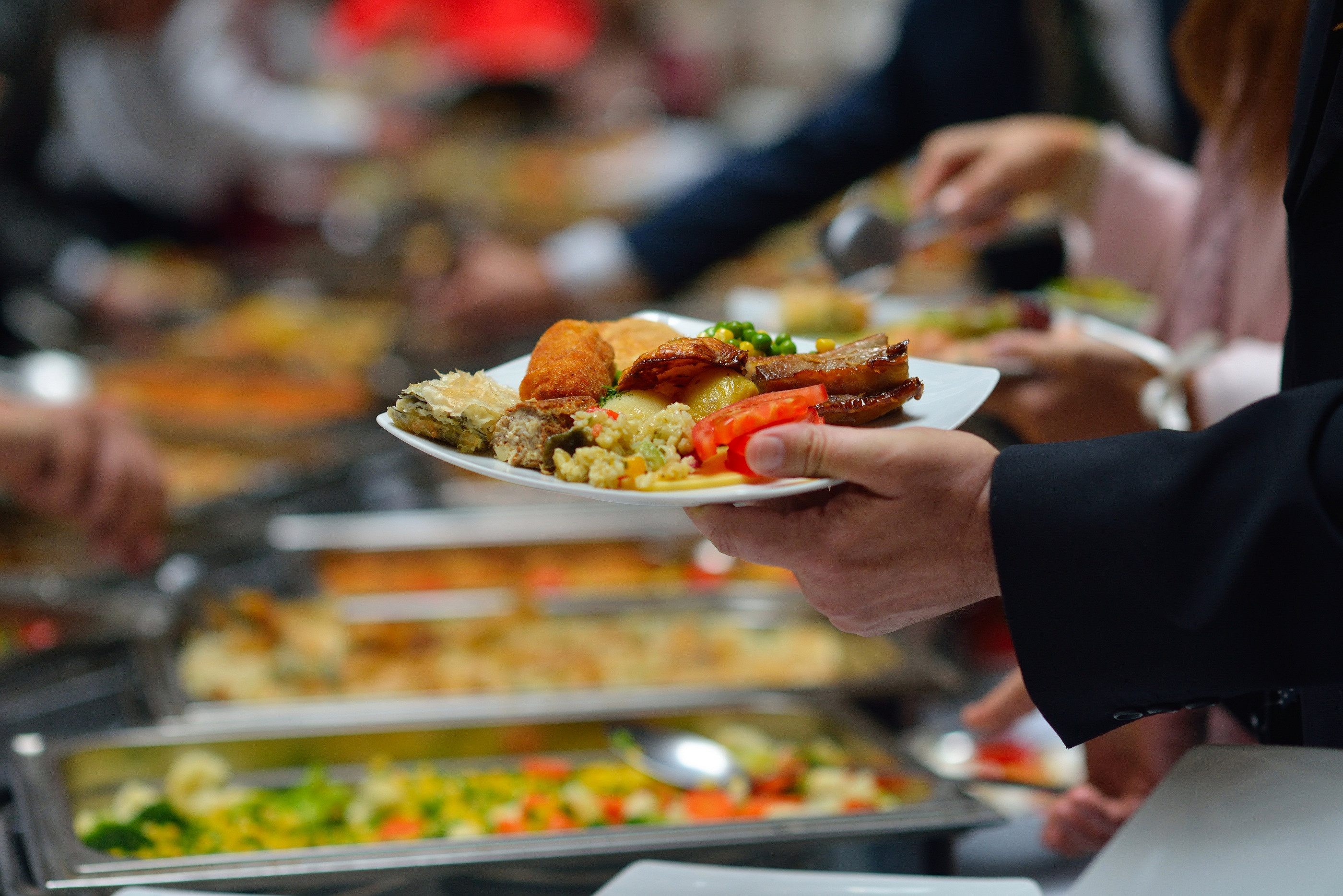 BUFFETS PERMANENTLY CLOSED: DECISION MAKERS HAVE STEPPED OUT OF LINE!

Widespread fear of spreading the coronavirus has made self-serve salad bars and all-you-can-eat buffets a thing of the past! Americans will have to swallow the idea of losing the ultimate symbol of dining freedom as many restaurants that rely on buffets are filing for bankruptcy and closing their doors. The country’s leading buffet restaurant chain, Golden Corral is changing its format and removing its buffets. Las Vegas casinos  have seen their final buffet days and so have cruise lines.  Not to mention, the convenience of hotel breakfast buffets will be a distant memory.  All this comes from a fear that eating at buffets will spread the coronavirus.

While the Food and Drug Administration (FDA) has stated publicly that there is no evidence showing any transmission of the virus from food or food packaging, they still recommend "discontinuing self-service buffets and salad bars.”  But it’s not eating the food that has them concerned; it’s people touching utensils at the buffet that others have touched.  Frank Yiannas, the FDA's Deputy Commissioner for Food Policy and Response advised, “Restaurants should  discontinue operations such as salad bars, self-service buffets or beverage service stations that require customers to use common utensils or dispensers.”

As a holistic physician, I’m not a big fan of the all-you-can-eat buffets. I believe they entice people to eat more food than they need, which is a leading cause of our obesity epidemic. However,  I’m less of a fan of unnecessary and outlandish FEAR tactics!  In my opinion, eliminating buffets to avoid getting COVID-19 is absurd!  When I was younger, I worked at several restaurants. The kitchen is crowded with cooks, managers, prep workers, and waitresses standing next to each other waiting for their orders to come up. Then there are the waiter assistants that handle all the dirty plates and bring them back into the kitchen and all the employees that touch the clean plates as they’re restocked. In fact, before any plates or utensils make it to your table, they’ve been touched by up to six different people!  If you order a glass of wine with your dinner, three people have touched it:  the person that socked the glass, the bartender and the waitress. No one thinks twice about getting someone’s “cooties” each time they take a sip of merlot with dinner.

Okay, you’re probably thinking, “Yes, but having 3-6 people touch your glass or plate doesn’t compare to the hundreds of people that have potentially touched the utensils at a buffet!”   If that’s your concern, then ALL restaurants should close down indefinitely. When you enter a restaurant, you touch the door that hundreds, even thousands before you have touched. When the hostess brings you to your table and you pull out that chair before sitting down,  do you think anyone has washed it between customers? I have news for you. No one washes or sanitizes restaurant chairs!  Think about how many thousands of people have touched the same armrest over the years.

When the waitress hands you the menu,  it has not been sanitized. If the customers before you coughed, sneezed, or picked their nose while reading that menu, you are touching their germs. When your meal is over and the waitress hands you the bill holder, that too is contaminated with everyone’s germs that touched it before you.  For those of you that push on the metal toothpick container on the way out,  you just touched thousands of people’s germs. Then you take that contaminated toothpick and place it between your teeth. A bacteria’s main portal of entry into the bloodstream is through the gums.  I could go on and on, but I think you’re grasping my point.

GERMS ARE OUR FRIENDS!

Before you allow what I just shared to scare you away from ever going to another restaurant, I want to go over a little Germ 101. First and foremost, germs are our friends!  In fact, the human body is made out of germs!  Current research shows human cells make up only 43% of the body's total cell count. The rest are microscopic colonists. This includes bacteria, viruses, and fungi. That’s right,  almost 60% of your body consists of germs!  And we are exposed to over 60,000 different types of germs on a daily basis. One third of healthy people are walking around right now with staphylococcus aureus in or on their body, but they don’t have a staph infection. Forty percent of the population has streptococcus in their nose and throat without it causing any illness. We need to have contact with germs to help us build our immunity.  Everyone has become so germophobic over the years, parents are even afraid to let their kids play in the dirt.  That dirt just so happens to be the best defense to building up a child’s immune system.

Dr. Anthony Fauci, a key member of the government’s coronavirus task force, recently announced that he recommends people should never shake hands again! That’s right, even after this pandemic has run its course, Fauci says shaking hands needs to stop.  I believe that is the absolute WORST advice!  We don’t need to live the life of Howie Mandel, the fist-bumping OCD germophobic comedian and judge on America’s Got Talent.   I had the privilege of interviewing Howie on my radio show and he and I discussed his hand shaking phobia.  I’ve seen Howie go on talk shows and refuse to shake Jimmy Fallon’s hand, and Conan O'Brien, Jay Leno, and Jimmy Kimmel’s hand, yet during these interviews, Howie puts his hands on the chair rest without giving it a second thought. Thousands of previous guests before him have touched that same chair rest but somehow Howie has managed to survive.

Why has COVID-19 scared people away from ever shaking hands again and touching utensils that others have handled at a buffet line? The history of the handshake dates back to the 5th century B.C. in Greece. It was used as a symbol of peace. Humans didn’t stop shaking hands after the deadly 1918 Spanish flu (50 million deaths,) nor did we stop the tradition after the 1956  Asian Flu (2 million deaths,)  the  2009 Swine Flu  (575,400 deaths),  and the  2010 whooping cough pandemic (670, 000 deaths,) just to name a few.  In fact, pertussis, known as whooping cough, is one of the most highly contagious and commonly occurring diseases in the United States. And let’s not forget the seasonal flu which infects a billion people worldwide and kills 80,000 Americans per year!  How is it that we’ve managed to survive the world’s worst pandemics and resumed shaking people’s hands?

When COVID-19 is gone and things get back to normal, just like EVERY other pandemic in history; why can’t we shake someone’s hand we meet for the first time or give our friend a celebratory high five when our favorite sports team wins? Will preachers at weddings end the ceremony with,  “I now pronounce you man and wife, you may fist-bump the bride”?    If we live in fear of shaking hands to avoid catching the coronavirus, certainly hugging people will be off-limits. That means less sex and fewer children being born. I guess  Dr. Fauci’s recommendation will help with the overpopulation concern. Fauci serves on the Leadership Council of the Gates Foundation.  In a Forbes Magazine interview Bill Gates said, “The answer to eradicating disease stems from population control.”

As of today, the CDC states there have been 109,000 deaths from COVID-19. Many authorities have shown evidence that this number has been highly exaggerated and the actual count may be much less.  However, assuming the CDC’s number is accurate, the USA has a population of 330 million people which means  COVID-19 has a 0.00031% death rate.  While I consider ANY death from COVID-19 to be too many if eating at a buffet puts people at a greater risk of losing their lives,  why aren’t ABC liquor stores and bars permanently closing?  Millions of people die every year from alcohol-related causes. This includes car accidents, suicide, liver disease, high blood pressure, and strokes.  Instead of closing the liquor stores, they’re eliminating buffets to protect people from COVID-19, a disease that has a 98.7 % recovery rate.

The Centers for Disease Control and Prevention have updated their stance on how the coronavirus spreads and has stated,  "The coronavirus does not spread easily from touching surfaces or objects.”  Wait. Say what?!  If that’s the case, why are buffets being permanently closed down?   An even bigger question is, why hasn’t this great news from the CDC gone viral in the media? As I’ve shared in several of my previous articles and in my #1 best-selling book Food Sanity; the media would rather keep people living in FEAR than spread any good news. The media’s motto is, “If it bleeds, it leads.” Fear attracts eyeballs and that means more sponsorship money coming in.

During a viral outbreak, it’s understandable that we need to avoid handshaking and practice regular hand washing; however, we can’t live our entire life afraid of germs.  Shaking hands, touching doorknobs, and handling utensils at a buffet that many others have touched, helps strengthen the immune system. And if you do end up among the less fortunate and get sick, past exposure to germs when you were healthy will give your body a better chance of bouncing back to good health.

What’s next on the agenda, removing water fountains from schools, malls, and airports? After all,  everyone uses their hands to touch the button before drinking. Maybe we should also get rid of elevators and make everyone take the stairs instead?  Those elevator buttons are contaminated with lots of germs! So are ATM machines.   Permanently banning buffets is not going to keep people safer than dining at a restaurant table. If social distancing is still warranted, people can stand six feet apart while in line at the salad bar. Closing down the nation’s buffets is just giving people a false sense of security.  If the “perception” of buffets being a health risk overshadows the actual facts, a better solution would be requiring mandatory hand sanitizer stations at every buffet. Another option would be having an employee in the bathroom put a wrist band on everyone that washes his or her hands, which would need to be shown before being granted access to the buffet line. That sure beats shutting down restaurants that rely on buffets and not allowing them in hotels or on cruise ships ever again.

Whoever is making these stupid decisions is completely out of line (not just the one at the buffet.)